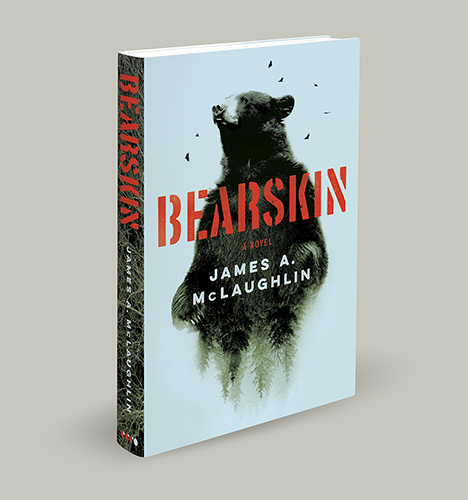 The Ecco/HarperCollins page for Bearskin is here, and includes links to sites where you can order.

“Exciting. . . . McLaughlin skillfully breaks down the actions of hunter and hunted into their constituent parts. . . . Some of the best action writing in recent fiction.”
— Dennis Drabelle, Washington Post

“Taut as a crossbow and as sharp as an arrowhead. . . . [With] a landscape whose heart of darkness pulses viscerally through its characters. . . . Smoothly orchestrated. . . . A thrilling, thoroughly satisfying debut.” — Publishers Weekly (starred review)

“[A] hard-edged thriller. . . . It’s a violent, compelling story that uses its milieu to incredible effect. . . . The novel dares the reader to root for this damaged antihero but convinces us that he’s worth it. An intense, visceral debut equal to the best that country noir has to offer.” — Kirkus (starred review)

“A powerful and often profound debut. . . . Bearskin constructs a riveting narrative, set within a natural world that, should it vanish, McLaughlin suggests, might take part of us with it.” — Charles Finch, USA Today

“Accomplished and evocative. . . . It’s a slow-burn by design, a tale of suspense that reels you in through McLaughlin’s scrupulous skill. . . . A philosophical investigation of man and nature, washed in noir. . . . Elegiac, hypnotic—unshakable.” — Entertainment Weekly

“[A] hybridization of raw violence and sensitive environmental awareness. . . . Like an amalgam of Pilgrim at Tinker Creek and Deliverance. But it works. Beautifully. . . . Taut and exciting.” —Psychology Today

“[A] near-perfect first novel. . . . McLaughlin smoothly reveals the story of Moore’s history of muling for the cartels with the realism of a Don Winslow border novel. . . , [A] carefully crafted tale of mystery, ecology, backwoods mysticism and downright evil. . . . Bearskin captures the blurry line between studying primordial nature and being a part of it.” — Shelf Awareness

“Part thriller, part crime novel, part dreamscape…Smart and sophisticated, with animals both wild and domestic acting as metaphors, Bearskin is a gritty, down-home tale told with brute force. Rice is a memorable, reluctant hero for both his community and the animals in his charge.” — BookPage

“Haunting. . . . Rendered in remarkable prose. . . . [An] edgy tale, with human greed and wildlife exploitation at its heart.” — Booklist

“Bearskin walks a fine line between a thriller and literary fiction, and it successfully keeps clear of the usual pitfalls presented by both genres. In doing so, it quickly becomes the type of novel that is talked about for a while, and one that announces the arrival of a voice with something special to offer….” — Gabino Iglesias, Criminal Element

“A journey into the wilds of Appalachia. . . . Tightly plotted and beautifully written, Bearskin marks an auspicious debut.” — Nylon Magazine

“The Appalachian Mountains have their new Ivan Doig in James McLaughlin—the man writes so well about the green, the rain, and the old rocks. But this isn’t natural history writing, exactly. More like Kem Nunn. The lone hero, a conscientious biologist with a tender spot for animals and a propensity for violence, bites off more than he can chew. Bad guys, really bad guys. You won’t be able to put it down.” — Jordan Fisher Smith, author of Nature Noir and Engineering Eden

“Bearskin—a gripping tale written in spare, beautiful prose—tells the tale of Rice Moore, a reluctant hero, competent, resilient, and utterly engaging.  McLaughlin is a gifted storyteller, and Bearskin is a remarkable debut.” — Scott Smith, NYT Bestselling author of A Simple Plan and The Ruins

“Bearskin is visceral, raw, and compelling—filled with sights, smells, and sounds truly observed.  It’s a powerful debut and an absolute showcase of exceptional prose.  There are very few first novels when I feel compelled to circle brilliant passages, but James McLaughlin’s writing had me doing just that.” — C.J. Box, #1 NYT bestselling author of The Disappeared

“A secret past, old foes, bloodthirsty locals, and the destruction of the natural world converge in McLaughlin’s debut novel. An intricately written thriller that explores the darkest parts of human nature against the beauty of unspoiled American wilds.” — Ace Atkins, New York Times bestselling author of Robert B. Parker’s Old Black Magic and The Sinners

“At once brutal and beautiful, Bearskin is a tense, haunting thriller brought to life by McLaughlin’s deft and vivid rendering of the rugged mountain landscape and the beasts that dwell within. A powerful debut.” — Laura McHugh, author of The Weight of Blood and Arrowood

“Bearskin” – the novella – in The Missouri Review, Summer 2008. Honeybees and bear poachers in the mountains of Virginia. Winner of the 2009 William Peden Prize in fiction.

“Rules for Living at the Urban-Wildland Interface” in Camas, Spring 2006. Essay about the perils of falling in love at the Interface.

“Shovelboy” in The Portland Review, Vol. 52, No. 3, 2005. The catastrophic economic downturn disrupts a privileged exurban enclave in this near-future tale.

“¡No Pasaran!—Rage and ORVs” in River Teeth, Fall 2003. The author dissects his irrational hatred of off-road vehicles. Chosen as a Notable Essay of 2003 in The Best American Essays, 2004.